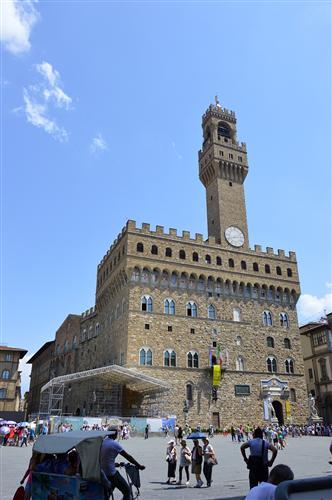 Florence with its museums, palaces and churches houses some of the most important artistic treasures in the world.
Among the most famous places of art and worship in the city are the Cathedral of Santa Maria del Fiore, the Baptistery, the Uffizi Gallery,
the Bargello and the Galleria dell 'Accademia. The churches of Santa Maria Novella and Santa Croce are then real art galleries,
as well as the Biblioteca Medicea Laurenziana is an exceptional expression of Michelangelo's architectural genius.
We advise you to reserve some time to visit the important and varied collections kept at Palazzo Pitti.
When you feel tired of seeing museums and art galleries, go outdoors and you will find that in Florence it is also beautiful just wander through the beautiful streets of the old town. Walk until you reach the Arno, pause on the romantic Ponte Vecchio and continue to the Oltrarno, the most "new" part of Florence. Spend a day at the Boboli Gardens or climb up above the hill behind Piazzale Michelangelo and you reach the Church of San Miniato al Monte to enjoy an incredible view of Florence.
Florence and its unique treasures are waiting for you! 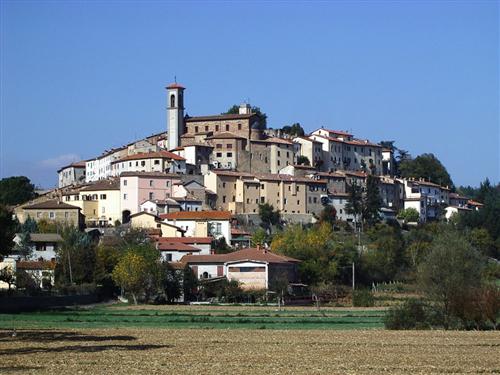 The medieval village is set on a place in the Etruscan-Roman was dedicated to the worship of Hercules. Monterchi is best known because it keeps the famous fresco of the "Madonna del Parto" by Piero della Francesca (XV cent.).

In the church of San Simeon you can see other works of art. 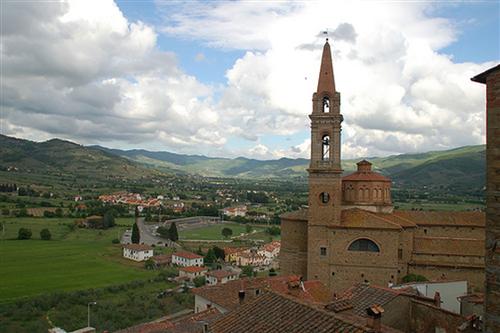 Castiglione Fiorentino of Roman origin, is a typical medieval village. 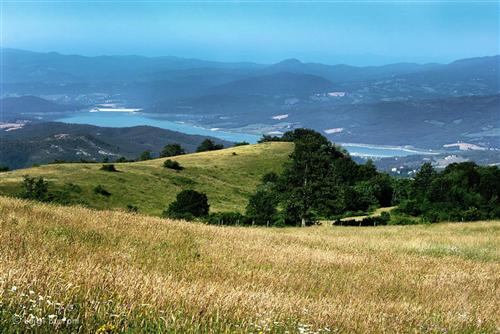 From Badia San Veriano looking towards EST admires the Tiber Valley and we can see the dam Montedoglio.
The Upper Tiber Valley, or Tiber, is the most eastern of Tuscany and takes its name from the river running through it in its entire length, to the border with Umbria. The Tiber Valley and along the border was a meeting point between different civilizations, the Umbrian and Etruscan, Byzantine and Lombard. 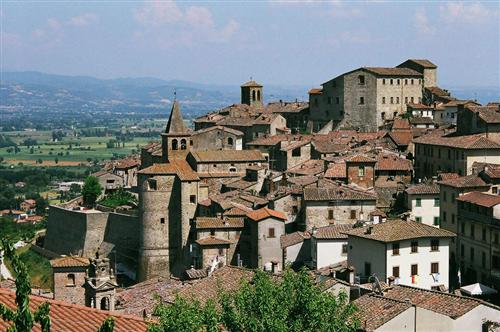 Set on the slopes of the hills that surround the west the Upper Tiber Valley, Anghiari unchanged conserve, in the most ancient, the medieval character.
In the '500 were created outside the ancient castle walls a beautiful road on a steep slope and a square lined with buildings of noble architecture.
In the church of the abbey of stylus octagonal Romanesque, in the medieval church of St. Augustine and in the Town Hall are valuable works of art. At the foot of the hill, the church of Santo Stefano is one of the oldest in the region (VI sec.). 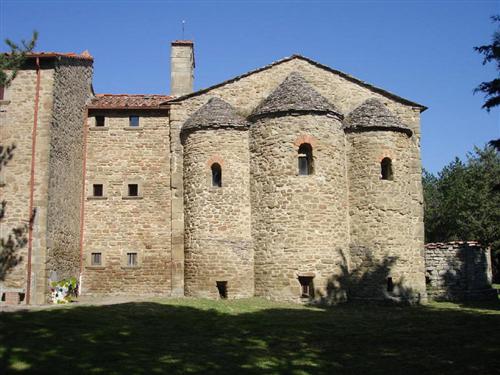 about 1 km away, with a walk of about 20 minutes, is from Castelluccio, Badia San Veriano. Here is a beautiful church. The geographical location and its structure make it a place full of charm.
The construction of this church is dated around the year 1000 AD as a Benedictine monastery with influences Byzantine, Romanesque and Ravenna.
It is assumed that from the Benedictine monastery is became Camaldolese in the years between 1105 and 1113.
The current building consists of a rectangular room ending with three semicircular apses of almost equal height and joined to each other.
On the left the remains of a cylindrical bell tower. Original and striking the crypt below. 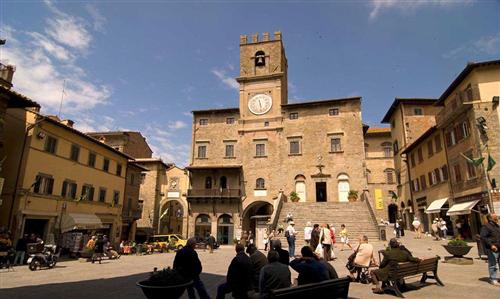 Cortona Etruscan still preserves many works including the massive city walls and various Etruscan tombs. The character of the buildings is mainly medieval. To visit for its ancient history, to the breathtaking views, the architectural structure of the buildings that climb the hill to the Church of Santa Margherita. 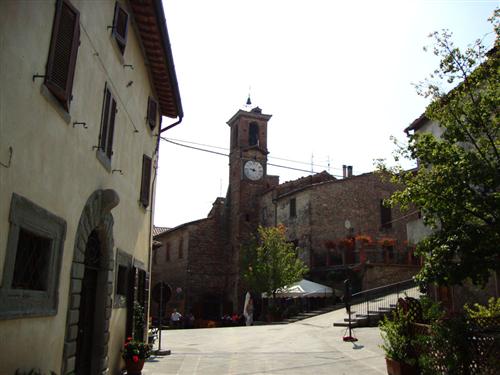 Badia San Veriano is very close to the border with Umbria.
The medieval village nearest is about 2 km from Citerna Monterchi 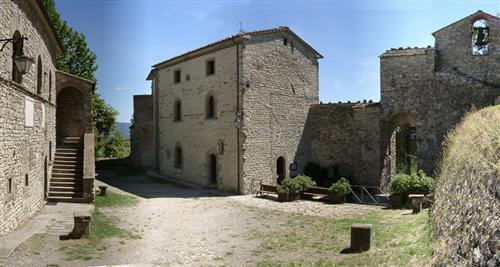 Famous for being the birthplace of Michelangelo, this castle remains almost intact its perimeter, within which are the seat of the municipality and the house Podesta, today Museum of Michelangelo. Following modern restorations, the oldest wing of the building is now an exhibition hall of the natural reproductions of works by Michelangelo.
Inside the museum, or the environment in the green, you can admire the works of the greatest contemporary sculptors conspicuous constituents heritage museum dedicated to the great artist.
In the nearby church of Tifi: altarpiece of the fifteenth century. 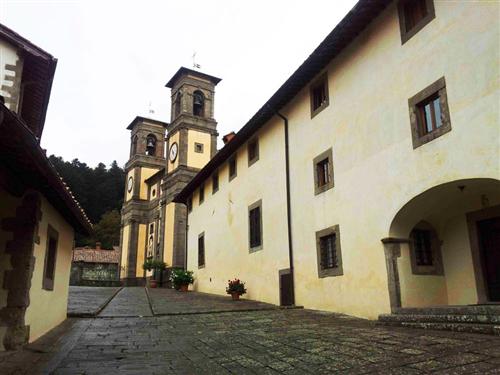 Camaldoli (814 m) with his hermitage (1111 m) in the heart of the ancient forest Casentino, is one of the most evocative and easier. The Hermitage, created by San Romualdo in 1012, is characterized by its cells, all equal and separated from each other, in which close voluntary total isolation monks. 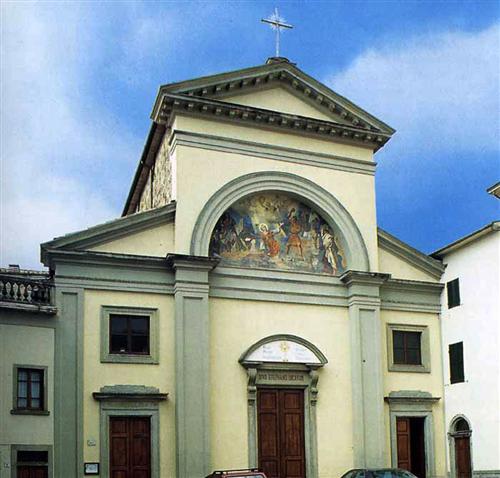 it is the ancient Roman Sulpitia.
The medieval structure was heavily damaged by the war (Praetorian Palace and Town Hall) with stone coats of arms or Della Robbia workshop. Della Robbia tables are also present in the Collegiate with a Latin cross. Noteworthy is the shrine of Our Lady of the century Enlightenment. 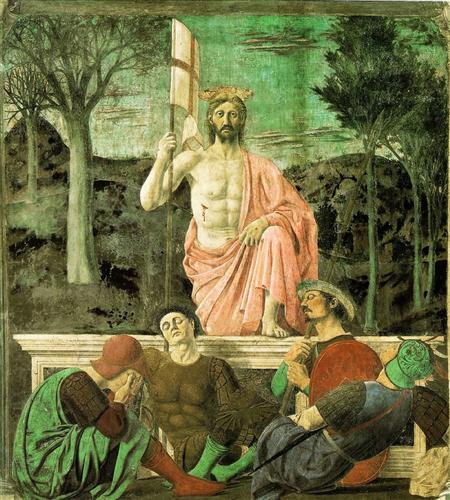 At the foot of the last line of the Tuscan, Sansepolcro dominates the Upper Tiber Valley to its unfolding in a vast amphitheater of hills. Probably from hillside amphitheater. Probably of Roman origin, the city has a face serene and harmonious. The urban structure within the walled quadrilateral remained the medieval, enriched with fine Renaissance and Baroque buildings. The artistic heritage, really remarkable, is harvested primarily in the Civic Museum, where you can admire the altarpiece of the "Madonna of Mercy" and "us resurrect" by Piero della Francesca, the great artist who was born in this city in the early fifteenth century . Among the most interesting buildings: the Romanesque Cathedral, the Loggia of Lauds (XVI sec.), The church of San Francesco (XIII sec.).

Events: 2nd Sunday of September there is the traditional Palio della Balestra. 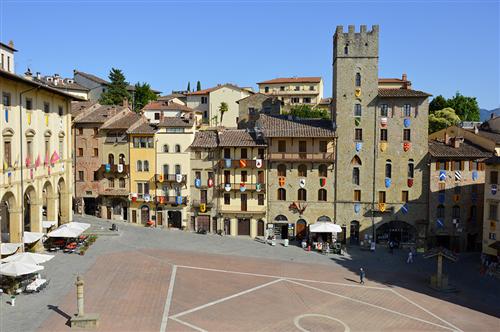 Arezzo has Etruscan origins, we know that as early as the ninth century BC existed an Etruscan Arezzo with a name substantially identical to the current: Arretium.

In later centuries become a city of strategic importance. The land of Arezzo has given birth to many characters, among the most famous: Guido Monaco, Francesco Petrarch, Giorgio Vasari, Michelangelo Buonarroti. Between 1418 and 1420, was born Piero Della Francesca, his works can be seen in addition to Arezzo, the Cathedral and the Basilica of San Francesco in Monterchi and Sansepolcro.

In Arezzo there are many historical, religious and cultural not to miss:
- The Cathedral (Maddalena by Piero della Francesca, stained glass windows by Guglielmo de Marcillat)
- Santa Maria della Pieve (the largest and most beautiful Romanesque church of Aretino)
- Piazza Grande (one of the most original, organic and picturesque squares in Italy)
- Basilica of St. Francis
- Casa Vasari
- Church of San Domenico with a beautiful Cimabue Crucifix
- Chiusi della Verna
On the Sacro Monte, today's grand convent has kept intact the places made famous by St. Francis and the works later fate.